Baseball is Back! Let’s Look at Historical Franchise Numbers

For baseball fans, opening day signifies the return of baseball for the next 6 months (7 if your team does well).

Contract talks are usually behind us, spring training is over and done with, and the games in April count just as much as the games in September.

I thought it might be interesting to take a look at some historical numbers for MLB teams. Separating them into the total number of wins for each team gives us a chart like this: 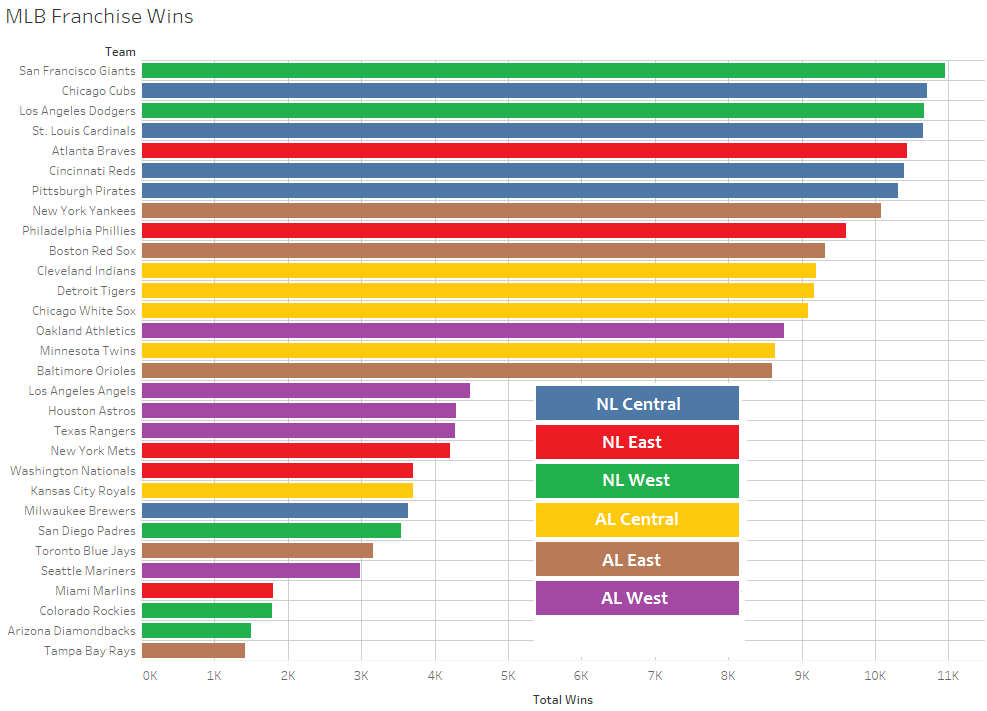 A couple of things immediately become apparent. #1 – The top 7 teams in the total wins category are all National League teams. This kind of makes perfect sense since many of them have been playing since the 1880s. #2 – Another “Duh” observation: the fewer seasons a team has played, the fewer wins they have.

American League West teams seem to be well represented in the lower half of the chart. The team with the most wins – the Oakland A’s – tops out at #14 overall. Many of the west coast teams were created well into the 20th century since baseball was more popular in the eastern U.S. Even the top 2 NL West teams started out on the east coast.

Four of the current NL Central teams are in the top 7 in overall wins. Again, this goes back to the fact that many of these teams were founded before some sports (competitive hot dog eating, e-sports, and basketball) were invented.

We can also glean some interesting information in the form of rivalries. Up near the very top, the Giants/Dodgers and Cubs/Cardinals rivalries take up the top 4 spots while the Yankees and Red Sox pair up close to each other.

Total wins can be looked at as an interesting statistic when taking the entire history of a team into consideration, but to get a better idea about how teams perform over the years, win-loss percentages are a much better measure. 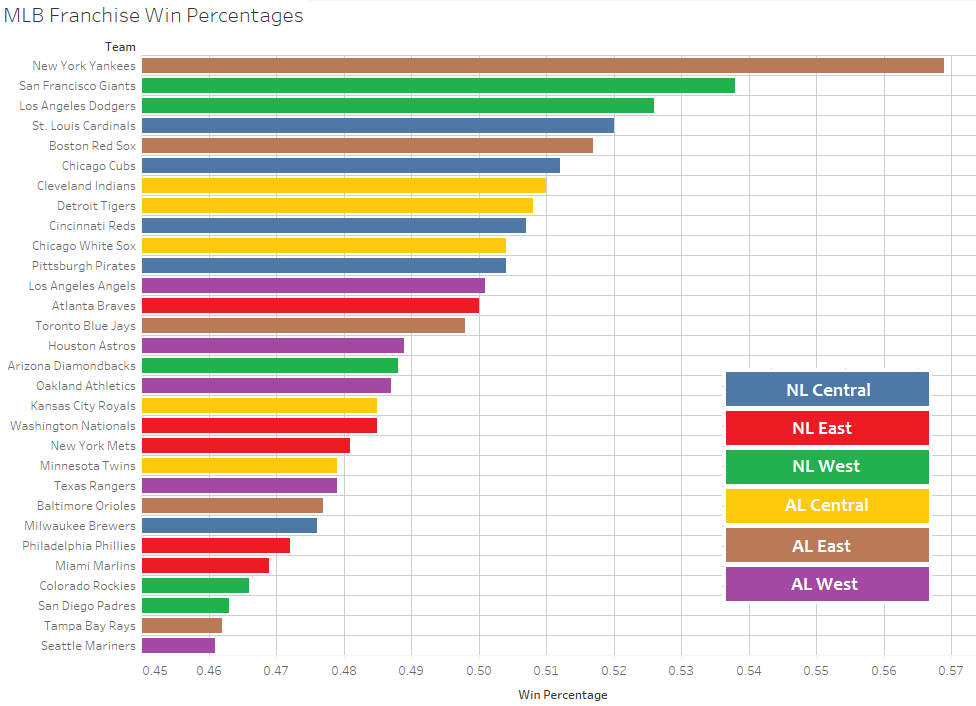 As evidenced above, the New York Yankees have, by far, the best winning percentage in baseball. The next two teams were both originally New York teams. It’s almost as if playing in New York City has an effect on how many games you win as a baseball team (sorry Mets fans).

Indeed, for the most popular game in the biggest city in the country, it was important to spend the kind of money required to build great teams. Win games and you can charge more for tickets, charge more for tickets and you can afford to spend more money on the best players. These days, you can throw concessions, programs, souvenirs, and parking into the revenue stream as well.

All told, it makes lots of business sense to spend big money on players who have the best chance to get your team wins. This ended up leading to the luxury tax in baseball, a sort of salary cap that, while it can be surpassed, comes with a price to pay. Since the luxury tax was initiated in 2003, the Yankees have paid at least $11 million every year. In fact, out of the approximately $400 million MLB has collected in luxury tax, just about 75% – $297.6 million – has come from the Yankees.

Looking down through the chart, a few more things stand out. The newest teams almost always have the worst winning percentages. None of the bottom 5 teams above can in any way be considered a “legacy” team in MLB. Then we get to the Philadelphia Phillies at #25 and they have been around for 130 years. A few years ago, the Phillies became the first professional sports team in the world to hit 10,000 losses. Since then, several other teams have hit the 10,000 loss mark but have offset it with more in the way of wins.

Another interesting figure is the Braves’ winning percentage, rounding to 3 places, it’s .500. The Braves have been in existence since 1876 and they are sitting at 10438-10433. A slow start next week could turn their 141 year winning franchise into a losing franchise. All of this while winning 3 championships/World Series titles.

For a true exercise in futility, one need only to look at the Seattle Mariners. With the lowest winning percentage in baseball at .461 and 0 World Series appearances, even after tying the modern MLB record for most wins in a season (116) in 2001, it’s easy to see why they are at the bottom of the list. Not to say that there isn’t hope, even the Cubs won the World Series after a 108 year drought, but 2017 likely isn’t the year.

Want a giant baseball glove created by Rawlings as a chair in your house? Only if you have $4,800 to spare.